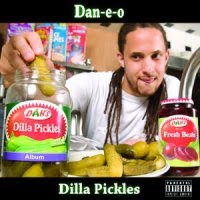 Dan-e-o is a hip-hop legend to those who know, a complete mystery to those who don't, and often the only difference between those two groups is whether they are North or South of the Canadian border. That's unfortunate given Dan has over a decade of quality hip-hop music under his belt, including albums covered right here at RR like "See No Evil, Hear No Evil." As it turns out Dan's a very technologically savvy artist, so even as we were checking for him, he was checking for us too. That quickly leads me to an item of disclosure in the interests of fairness. Dan is more than just another rap artist with an album to cover, he's a friend and a business partner. Long-time RapReviews readers know that affiliated wrestling site AngryMarks.com hosts his hip-hop influenced pro wrestling podcast called Tha O Show with co-host Big Daddy Donnie. Dan has also been a guest on several of my own podcasts about MMA and hip-hop, including our most recent edition of the Hip-Hop Shop.

You are entitled to be skeptical of anything that follows if you like, but if you read our "See No Evil" review you'll see that none of these things were true five years ago and Dan still got a very warm and positive review. In the intervening time Dan-e-o's rap skills have if anything gotten sharper, even as the means of distribution got narrower. Dan's been forced to use MySpace and his website to keep fans up to date and hype new projects, and by his own admission there were times that a lack of mainstream recognition made him question being so dedicated to making music. There's little doubt that Dan-e-o loves hip-hop though, and he was just as moved by the untimely death of J Dilla as rap fans in the U.S. and around the world were. In that respect "Dilla Pickles" is an album three years in the making, although songs like "Legacy" spit on very recent events that were equally meaningful to Dan personally such as the passing of a pop music icon:

"Yo, just finished watching Michael Jackson's memorial
Unimaginably impactful and historical
Heaven's oracle, taught that the world can horrible
But he implored you to find the divine from the deplorable
How did you make an aberration adorable?
How did you steer off infection when killer bees were swarmin you?
How do I insure the impossible is affordable?
How do I make a change cause my voice is recordable?
Mike I thought of you when I was writin this verse
to fight off the curse, the opposite of which you find worse
As you ride in that hearse, lines conveyed with pride that burst
It finally worked, I realized I shine on this Earth
While you were a strong storm, well I was just a meek creeper
But MLK said be proud if you a street sweeper
And Al Sharpton ruffled and woke up the deep sleepers
And told your kids it's strange the roles of the peacekeeper
You know what I find strange? I find it strange that you're gone
You know what I find wrong? To write your name in the song
in the past tense, it's strange I'm remainin this strong
Cause since I was born, the top is where your reign has belonged
I cried today, but Michael Jackson I'm alive to say
with platinum and diamonds you paved and aligned the way
For me to see my future's filled with many brighter days
And I'm here to leave a legacy behind to stay"

It doesn't get much better than paying homage to two icons in one fell swoop - recognizing the legacy of MJ while simultaneously honoring Dilla by flowing over his beat. It's true that many rappers have used Dilla's beats posthumously since his passing, from family members like Illa J to underground hip-hop icons like DOOM, but in those instances the songs weren't necessarily presented as tribute to his musical legacy. The key to "Dilla Pickles" is that there's absolutely no question about Dan-e-o's broader message, solidified by the fact the album's artwork shows Dan reaching into a jar metaphorically packed with Jay Dee's beats. Like the food they're named after, Dilla's pickles came in a whole favorite of styles and flavors. The lead single "Break it Down" showcases the crunchy Vlasic style, with a loud snappy beat and an aggressive in-your-face Dan-e-o rap:

"Yeah, let this seep inside your vertebrae
Forget the thought you'd never live to observe the day
where hip-hop was run by fools without a word to say
Songs blowin up cause it's all that you heard 'em play
I heard 'em play that bullshit so many times
Who would have thought rap could exist without any rhymes?
Or any beats, with funk from the street
Now chumps wanna speak on pop pumped out by geeks
They say it's wrong to sample now but it's okay to bite
Niggaz can barely battle but they still tryin to fight
They say it's wrong to diss, nowadays they call it hatin
Cause these ballers makin guap and cakin from the spawn of Satan
Like I'm supposed to support your music when it's garbage?"

Whereas "Crushin'" shows the bread and butter side of Dilla's pickles, the sweet sexual flavor as Dan flows to the beat of the same name originally on "Ruff Draft":

Say word! Dan's also paying tribute to the whole of hip-hop on the album, as songs like "Check the Grind" with Famous acknowledge A Tribe Called Quest while "Don't Cry" is the soulful fly R&B type of joint you'd hear from anyone East to West in the U.S. - Tupac to Kanye West. It's all credited to Jay on production though, which really leaves you in amazement at the end of "Dilla Pickles" as to just how versatile he was. As Dan noted himself in our interview there was no limit to the sounds and samples Dilla would use to create his audio masterpieces, so it's only right that there's no limit to the topic matter and flow styles Dan uses in rapping to them, giving that Detroit sound an ever-so-slightly Canadian accent. There's one other difference between "Dilla Pickles" and the other tributes to Jay Dee you've heard until now - Dan-e-o is not charging you for this one. He's produced an entire album of quality, original rap lyrics paired with Dilla beats and he's giving it away for FREE this Halloween at Dan-e-o.com. We can't praise him for creating the beats, that's reserved for the originator, but we can offer praise for him selecting the best OF those beats to make fun, witty, cocky and entertaining rap songs out of. The best thing I can tell you about "Dilla Pickles" is that this sounds like a natural collaboration instead of a posthumous one, so when the time comes to hand out candy this year treat yourself to a pickle instead - it's no trick.