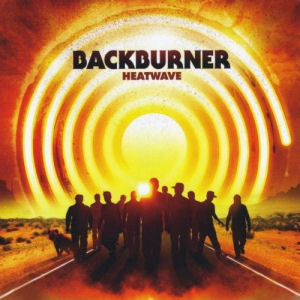 The liner notes to Backburner's new album are probably the funniest hip-hop liner notes ever:

"Dozens of albums have been released by groups and individuals flying the Backburner flag, and the dream has always been to squeeze our enormous personalities back into one tight package, and blast that package into space like Zod and that chick and the big dude in Superman II.

Heatwave: Fourteen tracks, sixteen rappers, seven producers, and one DJ. Even these liner notes are the most amazing liner notes of all time, and the CD itself is made of a radioactive compound that reverses aging and improves sexual confidence by up to a factor of nine. So basically I hope you like getting your face melted off."

"Heatwave" may not be the most amazing album of all time, but it is definitely comes close to living up to its tongue-in-cheek hype. With sixteen rappers and seven producers, there are some 1,792 combinations Backburner could take at any given time. So it's not a total surprise that they don't always hit sonic paydirt, but they strike gold more often than not.

On "Lifers," Chokeules, More Or Les, Timbuktu and Wordburglar trade rhymes over a funky break curated by Timbuktu.

"You just stumbled on to something amazing
Rap royalty like mummification
Put this in your playlist, add it to your favorites
Bookmark the pages anywhere our name is"

It has the bounce of L.A. true school acts like Jurassic 5 and People Under the Stairs, keeping true to the hip-hop tradition of crate-digging and MCing. Backburner would have definitely fit in with the late-90s early 2000s SoCal scene that gave birth to People Under the Stairs and Jurassic 5. Influence-wise they are part Sugarhill Gang, part Eric B. and Rakim, part KRS-One, part Wu-Tang Clan, with a little bit of Eminem's smart-ass character.

A lot of what Backburner does is battle rap, pure and simple. Their main weapons are pointing out how skill deficient other rappers are, the superior rapping capabilities of their crew, and how much sexual intercourse they have with the finest of hotties. The MCs are all solid lyrically, offering complicated and clever rhymes that highlight both their skills on the mic and their senses of humor. They aren't the most threatening battle rappers out there, but I liked their humorous but skillful shtick better than the typical tough as nails rapper whose main goal in life is to prove how hard he is at all times. Backburner can never be accused of taking themselves too seriously.

It's not all braggadocio, though. "Back Home" deals with being homesick and living life on the road, while "Hurtin'" relays the story of a vicious hangover. "Long Story Short" is a long list of stories of sexual conquest.

While their are a couple of duds on "Heatwave" ("Freak Show Physics," I'm looking at you), the majority of the album is solid rhymes over equally solid beats. If you like hip-hop that emphasizes skills over swagger and humor over acting hard, then Backburner are the collective for you.