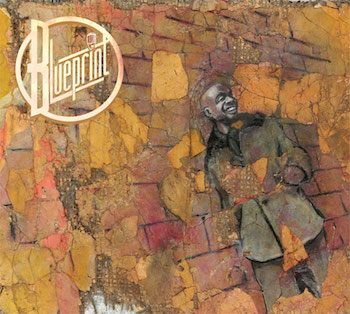 The Hip hop industry rarely rewards creativity, because if it did then Blueprint would be a millionaire, and not just referred to as one of Jay-Z's better albums. No matter where you search "Blueprint", you're going to bump in to the Jay-Z record unless you're in a physical store sifting through artists in the 'B' section. But Blueprint (the rapper) is no second-rate artist, and deserves more recognition than he has so far garnered. His solo work most notably the concept album "1988" has largely been praised by rap critics (including our writers) and Blueprint continues to deliver some inventive, memorable songs on his latest release "Respect the Architect".

For some reason, Blueprint has always felt like a workmanlike emcee - one that puts a lot of thought and effort in to his rhymes without ever blowing the listener's mind. When you start to listen back to his previous records, and his collaborative work with Illogic, it becomes increasingly apparaent that Blueprint isn't just consistent, he's consistently dope. He's quietly got on with it, throwing out records every other year and earning respect from fans and critics alike. He can even claim to possess a genuinely great album in his discography in "1988", but "Respect the Architect" genuinely took me by surprise. It's thirty minutes of dense, lyrical hip hop where not a line is wasted, and thanks to Blueprint impressive production skills, the beats bang hard without compromising either the content or impact of Blueprint's rhymes. "Overdosin'" is brutal on the ears, yet as joyous as any Madlib production at the same time. Each song is just the right length, never outstaying their welcome while also boasting innovative concepts. Blueprint has always had a knack for storytelling, whether it was the hilarity of "Big Girls Need Love Too" on "1988" or here in 2014 on the superb "Perspective". Mocking superficial rhymes would be too easy, so Blueprint provides eye-opening examples of ignorance that many wouldn't initially regard as such:

"I don't care if you're living in a high-rise,
You're no different from a man in a hut,
Every single life is sacred in God's eyes
You ain't worth more because you have more stuff
I don't care what the colour of your skin is
I don't care about your fortune or fame
I just want for us to have more perspective
And understand that everybody's pain is the same"

"Respect the Architect" (the song) is up there with Black Moon's "Shit Iz Real" or Blacastan's "Life of a Tape" whereby not only does the beat get those hairs on the back of your neck a few minutes of sunshine, but the lyrics are perfectly placed. Are there many realer rhymes than this: "I've never forced the pen even if I'm getting paid, I wouldn't care if it was a song with Nas, BIG or Jay, you see what I did there, I shouted out the greats, without name-dropping every bar like Game, that's not a diss so don't get it twisted, it's just what my dudes say when they hear him spitting". It's the sense of apathy and normality that come from Blueprint's persona that lend him like-ability - something many emcees struggle with. "Silver Lining" will have you thinking long after the last bar, an underhanded jab at those that simplify their style because "it's easier to paint in black". Simplicity is there in beat-form, with much of this album possessing snappy, throwback production that's hard yet not overbearing.

There's depth in Blueprint's rhymes that can be overlooked if necessary, much like how a Nas verse can be taken at face value or studied for its technical aspects, or a Nintendo video game at surface level is accessible, but has hidden intricacies in its gameplay. Thankfully, Blueprint never feels nerdy or elitist like some emcees can that choose to throw words around willy-nilly, but there's no doubting he can murder the mic. Inevitably, Blueprint's style may be too thoughtful for some, which when coupled with his downtrodden, borderline ordinary (bordinary?) presence automatically limits his audience. It shouldn't, because Blueprint is a naturally gifted emcee that has shown time and time again that his music is worth your money. Last year's "Bend But Don't Break" saw him reunite with partner-in-rhyme Illogic as Greenhouse, a criminally slept-on record that was accessible - it had catchy hooks and an El-P like 'less is more' approach to the production. "Respect the Architect" isn't quite up to par with Blueprint's best work, but hammers home the message that Blueprint is one of the greatest emcees around right now. You don't have to have enjoyed any of his previous work, but this is a snapshot of why Blueprint should be respected in the hip hop game. "Respect the Architect" is clearly a worthy purchase, and replay value is guaranteed. It's not quite the perfect record though ("Bulletproof Resume" suffers from an instrumental that grates not long after its started) but aside from that, you're looking at one of 2014's greatest shortest albums from one of its most overlooked artists.