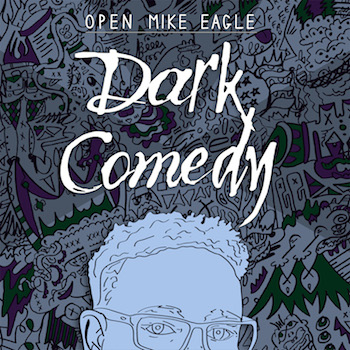 L.A. transplant Open Mike Eagle is often called a smart rapper. While it is an accurate description of his brainy rhymes, it's also a backhanded compliment to both Mike and other rappers. Calling Mike a smart rapper implies that his intellect is the most interesting aspect of his music. It also implies that other rappers are dumb, or that Mike is the only person in hip-hop with a college degree. It's hard to be stupid and make a living spitting complex rhymes, and most rappers have more going on upstairs than their songs about sex, drugs, and violence let on.

As to the label "smart rapper," while Open Mike Eagle's literate rhymes and obscure references may be his most obvious trait, the "rapper" part is more important. Being smart only matters if you can rap, and Mike's biggest gift is his ability to translate his intellect into compelling rhymes. He's been working on his craft for the better part of a decade. "Dark Comedy," his fourth solo album, is his best work to date.

As on his previous albums, he works with electronica-influenced beats, avoiding boom-bap or club rap. There are eleven different producers on "Dark Comedy," unlike his last album, where Awkward produced all the beats. Most of the tracks are melodic and pretty, with the exception of Jeremiah Jae's abrasive beat on "A History of Modern Dance," and Alpha MC's menacing beat on "Doug Stamper." Mike adds to the melodicism by singing most of his rhymes. He experimented with singing rhymes on "4NML HSPTL," but he perfects it here. The sung vocals add emotion to the songs and offset Mike's sometimes monotone delivery.

There is a definite nerdy vibe to Open Mike Eagle. He quotes nerd icons They Might Be Giants, raps about role playing games, and uses ten dollar words like "synesthesia" (which is where you perceive sounds as colors). The combination of high-brow lyrics, muted vibe and indie pop sensibilities on "Dark Comedy" also mean that it will probably appeal to many of the college-educated, left-leaning intellectual types that tune in to "This American Life" on a weekly basis (a description which includes myself). However, it would be unfairly reductive and inaccurate to label Mike's music "NPR rap" or "Nerdcore." As brainy and nerdy as he gets at points, there is bite to his songs. He's said in interviews that each of his song is based on something that bothers him, and he tackles a host of problems on "Dark Comedy." Things like racism, sexism, depression, addiction, and trying to make it as an artist in a genre where people use $1,500 laptops and $800 phones to illegally download an $8 album. "And nobody ever has to pay for anything," he raps on "Golden Age Raps," "Which is pretty cool 'cause everybody's unemployed." "My friends are superheroes," he raps on "Very Much Money (Ice King Raps)," "None of us have very much money though." He takes on his detractors and freeloaders on at the chorus. "That shit's not valuable/Come say it to my face/It's all disposable/Come say it to my face." On "Qualifiers," Mike twists rap braggadocio on its head, claiming "We're the best, mostly/Sometimes the freshest rhymers/We the tightest kinda/Respect my qualifiers."

He supposedly had an album worth of songs ready to go a while back, but realized they were all downers and so decided to make a less depressing album. Hence "Dark Comedy," with Mike "on that to keep from crying tip." There is a sadness to the album that comes through in the rhymes and in the subdued beats. In that sense it is a good companion to Atmosphere's recent "Southsiders," another album of somber, contemplative rap. Also like "Southsiders," "Dark Comedy" takes a while to truly appreciate. When you are dealing with four-minute songs with whispered rapping and a beat that isn't much more than a piano ("Idaho"), you can't just put it on in the car and hope to immediately get it. It's only after a few listens that you realize it is a song that is either about driving late at night drunk and high, or a metaphor about feeling out of control in life.

"Damn near fucking blind, don't know why you trust me to drive
I guess cause everytime you trust, we survive, but it's time
Is a motherfucking gamble
Eventually lady luck will call and say she cancels
You betting on my confidence when I was extra high, now I'm extra high
We'll pull over just to rest my eyes
And the only thing, fueling me is that I'm scared to die
And I'm scared for you cause you could die and never said goodbye
Why you trust me so? Why'd you let me lead
When I don't know where I'm going and I speed?
And this vehicle's the jankiest
Feel this coffee ruining my stomach and my pancreas
Sounds make me the angriest
So foggy the words, seem to be turning in different languages"

There are a lot of rappers who complain about the state of rap music: how it is full of sex and violence, how there is a lack of lyricism, how it is full of crass pop crossovers. Open Mike Eagle does one better and shows a path forward for hip-hop. His music isn't stuck in golden age worship, it isn't trying to be street, and it is more concerned with being good than with calling out other rappers for being bad. Sure he's a smart rapper, but he's a good rapper who infuses his music with melodies and meaning. "Dark Comedy" may not be the most banging album of the year, but it is one of the better ones.