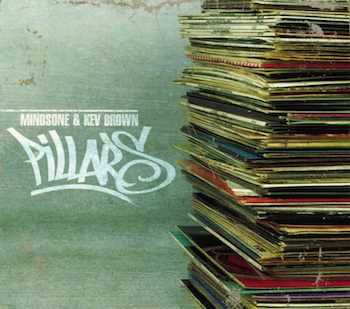 Kev Brown has always been one of my favorite producers, ever since he laced Cy Young with so many dope beats on his long-forgotten 2009 release "Exactly!". I'd previously heard his work with Wordsworth, but like many have done, completely slept on Kev Brown as a producer. His ordinary name doesn't do justice to the pure, simplistic joy of his production style - a smooth, note-reliant technique that is clearly influenced by the lengthy process of chopping up samples from dusty vinyl. Kev Brown isn't going to blow your mind, but you're 99% of the time guaranteed to enjoy the music he's put together. "Pillars" is no different, and handily includes instrumentals just in case MindsOne turn out to disappoint. They don't (for the most part), but it's clear who the star is here.

"Pillars" is technically an EP at seven tracks long plus an intro, the rest of the record is the same tracks but in instrumental form. MindsOne do their thing, possessing a laid-back, chatty style that does well not to intrude over Kev as he chops up samples in the trademark fashion his fans know and love. Somehow, Kev has his own sound amongst a field of producers who sound like each other. You could argue that he is the low budget J. Dilla, but it's a harsh compliment. What does set Kev apart is his reliance on bass lines, an oft-overlooked area of a genre obsessed with sampling riffs and vocals. "Pillars" isn't the most lively hip hop record, but its understated, slow-burning sounds will have your head nodding like a pigeon on crack.

Tracks like "Nightstalkers" and "Pop" showcase the composer in Kev Brown, being nothing much more than bass-riffs and drums. It harks back to the 80s where minimalism was prominent, pushing lyrics to the forefront - it's a shame then that MindsOne aren't quite the attention-grabbing emcees deserving of these beats. Admittedly, KON Sci and Tronic weave their words well over more intense instrumentals like "Legion of Doom (Remix)", throwing down childhood comic book references at will, but their laid back style is borderline horizontal. "Manipulated"'s chaotic backdrop (by Kev Brown's standards) relies on some swift turntablism to cover the blase raps, and it's the lower key affairs such as "Equinox" and "Pillars" where ironically, the MindsOne approach of chatty rhyming works well.

Given there are only really six tracks on this record (with rhyming), it's a tough sell at the full retail price. If you aren't interested in the instrumentals, then you can purchase individual tracks, but MindsOne know that Kev Brown is a maestro, and the main draw here. For what it's worth, "Pillars EP" is a nice little project that was best kept short and sweet, as MindsOne maintain a sturdy, reliable presence throughout that complements Kev Brown's style, but can't raise this record from being anything other than good, smooth hip hop.