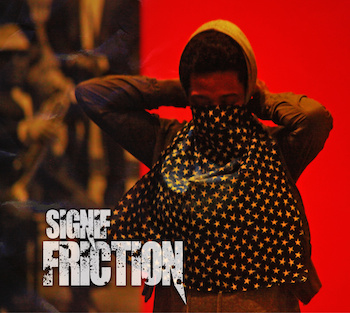 "I see the Senators want to control a woman's body...
They call it greasing palms - yeah I know
I'm pro-union and pro-choice just to let you know
I'm pro-life but believe in contraceptives too
I'm no feminist, I'm all for equality
So I won't listen if it's full of misogyny
Excuse my self worth, I pay plenty attention
Most of my people won't make it to collect a pension
Why you talkin that nonsense? You should pay attention
to what's goin on, who's making decisions
How it affects your loved ones, and how you're living"

I made the decision to open this review with a quote and an audio clip from SigNif's "Alright" because she strikes me as an artist with something important to say. You'll note that she spends a good part of the quotation carefully avoiding being pigeonholed. SigNif wants to be recognized as a dope emcee first regardless of gender, but also wants to make it clear that she's not an apologist for the people of the world who want to take a woman's rights or deny that those basic rights exist whether granted by society or not. She's clearly up on her gender politics, but SigNif is also up on politics PERIOD. She's doing something rare in hip-hop for any gender - advocating an active presence in government for the masses, particularly those who are at most risk of being underserved or abused by said same government. "Alright" is a dope track if you want to just headnod and enjoy it, but if you think carefully about what she's saying there are pertinent questions that need answering - what do YOU think your rights are, and what do YOU expect from the politicians who are in theory paid to serve our interests? Her active attitude about the system is that if you turn a blind eye, you may just find the other eye plucked out - unable to see what's happening in front of you.

For this song alone I could recommend SigNif's "Friction" highly, but the truth is it's hardly an isolated example of the higher level her hip-hop is operating on. She doesn't offer words that aren't carefully considered for their ability to impact the world positively. "Here today, gone tomorrow/that's why I inspire, for better, tomorrows/it's bigger than that the latest trends" quips SigNif on the breezy "Play 2 Win" featuring Elzhi. The JBM Beatz track gives hip-hop's best new intergender team plenty of room to prove why they deserve a title shot, and more importantly the fact they'd win the belts handily against almost any challenger. These rhymes weigh a ton.

SigNif is not capable of doing a half-assed track. "Never been bitter, never been a quitter/Bite my tongue so much I'm suprised it ain't cleavered... off/mouth full of blood, cough/Ditch confrontation by cutting you off." It's not every rapper who can show up a veteran like Sadat X, but on "Last Laugh" she truly gets it over both her compadre and her competitors. "Not your typical N word/a little more proper with the nouns and verbs/so your grannies can vibe to it." I can vibe to it too. I may not be capable of being unbiased about SigNif, but I hope that's a good thing, because I can't remember a woman in rap who impressed me this much right out of the gate since Bahamadia or The Lady of Rage. She's born and bred in Milwaukee but now calls New York City her home, and maybe there's something to that transition - she might have avoided the cliches and traps of East coast rap in the process. She's feminine but doesn't feel the need to flaunt it to get your attention. "The L Word (LikeLustLove)" shows that even her feelings of attraction merit careful consideration. She doesn't give out any L's for free, and on "Friction" she's not taking any L's either. She's got production from Skeff Anselm, Fate, DJ Puerto Roc, Radio Raheim, and Tay Lee - none of them do her wrong. Peep SigNif out.