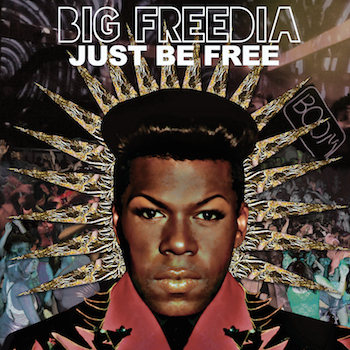 I found out about Big Freedia the way most white people found out about her: through her connection to the LGBTQ community. A few years ago I typed in "is there any gay hip-hop" in a search engine and the first hit was a 2010 article in the New York Times about gay bounce artists in New Orleans with Freedia and transgender artist Katey Red at the core. The fact that Freedia and Katey Red were not only queers in hip-hop, but gender-bending AND making women-friendly ass-shaking music made a lot of people outside of New Orleans take notice. In just a few short years Freedia's gone from playing grimy clubs with all-black audiences in sketchy parts of town to festivals teeming with white hipsters. She has toured with indie pop acts Matt and Kim and the Postal Service, she's played at New York's Museum of Modern Art, and she's played the late-night talk show circuit. She's been written about the Times and Vanity Fair. She has a reality show on Fuse. She's writing a memoir. And she's finally released her first proper album, "Just Be Free." The album is a reminder that what makes Freedia worthy of attention is not her sexual orientation or her gender identity, but the fact that she can make asses move.

For those not familiar with bounce, it's a New Orleans take on hip-hop that is frenetic, bass-heavy, and usually centered around the Triggerman beat and raunchy call-and-response lyrics. The music got a little mainstream love fifteen years ago when Cash Money was blowing up, but for the most part has been an underground, regional phenomenon. Then Freddie "Big Freedia" Ross, the 6'2" self-proclaimed "Queen of Bounce" set out to bring it to the world. (According to her Wikipedia page, Freedia isn't transgender, and considers herself a gay male who answers to he or she. I've only seen her referred to as a she, so I'm sticking with that.)

It may seem a little unexpected that the person to make bounce music mainstream would be a queer artist, given that there are very few queer mainstream artists, but it makes a kind of sense. Freedia makes the sexual aggression and raunchiness of bounce safe for women. Her shows provide women with a safe place to get freaky and shake their asses without feeling like they are going to be groped or judged. The music becomes more celebratory than predatory or demeaning. There isn't the edge of misogyny or loaded heterosexual politics in her shows or her lyrics. It's more like "We're all ladies here, now bend over and start shaking that ass." I'm not saying that lots of women don't love music with an edge of misogyny and loaded sexual politics (just watch a dance floor blow up to "Blurred Lines" or "Low" or "Ain't No Fun"). But there is also an audience out there that is hungry for music that is sexy and raunchy without all the bullshit. That's where Freedia comes in.

"Just Be Free" also improves on the sound of bounce, or at least what I've heard coming out of the scene Freedia was part of. If you listen to the mixtapes by Katey Red or Freedia, you'll hear a lot of enthusiasm but not a lot of technological know-how. A lot of it sounds kind of janky, and most of it works with sampled beats, and I don't see the Jackson estate okaying "ABC" being used in Katey Red's "Punk Under Pressure." Freedia worked with her longtime producer BlaqNmilD as well as a guy who had worked with Madonna to craft beats that would avoid sample issues, and also evolved Freedia's dabbling in house and EDM.

The beats hit hard, there is none of the tinniness that often accompanies the genre, and she expands on the sound. To a point. The songs are still built around hyper beats and chanted, repetitive lyrics. If you want lyricism or depth, look elsewhere. This is party music, pure and simple. Freedia also tones down the subject matter, keeping things relatively profanity-free and avoiding sexually explicit references. I mean, sure there is a song titled "Mo Azz," and "Explode" could be read to have a sexual meaning, but there are no lyrics along the line of "jump on that dick and ride it like a bicycle." Also, if you are looking for gay anthems, you are going to be disappointed. With the exception of "Where My Queens At," there aren't many references to Freedia's sexuality or gender identity. She's not here to make message music, she's here to have a good time.

The album is ten songs and a little over thirty minutes, and that is enough. There are only so many relentless booty-shakers with barked lyrics that a person needs. "Just Be Free" never drags and doesn't wear out its welcome. Freedia gets in, goes hard, and leaves you wanting more.

Whenever women/gays/trans/disabled/non-white people demand a bigger voice in culture, the old white males complain that including those voices will be the death of sci-fi/video games/hip-hop/etc. I'm here to tell you: relax. Big Freedia is not going to kill hip-hop. Having a big gay dude with a purse making rap music is not going to ruin rap music. People making shitty rap music will kill rap music, and Freedia does not make shitty music. "Just Be Free" is not hipster music, and it's not gay music. It's music for a good time, no matter what gender your partner is or what pronoun you use.