Wara from the NBHD :: Kidnapped 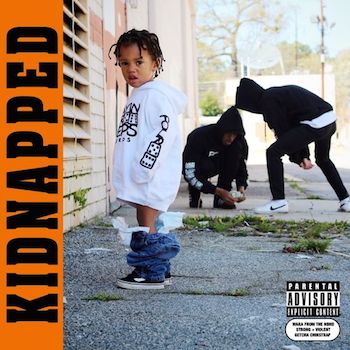 Though Wara from the NBHD lives in Atlanta, the 24-year-old was raised in Brooklyn. That borough is all over "Kidnapped." For starters, Wara sounds like "Reasonable Doubt"-era Jay Z, both in terms of his voice and his delivery. His bittersweet tales of street life are also reminiscent of early Mobb Deep and Nas. Production-wise, there's some Mobb Deep, a little Neptunes, and hints of RZA at his peak. Wara also has a respect for the craft of hip-hop that comes from being raised near its birthplace.

Like many great producers, Wara comes from a musical family. His dad was a musician, and Wara knows his way around a piano, guitar, and drum set. He fills his songs with those instruments. As a result, his songs have strong melodies and choruses. Wara's specialty is adding unexpected bursts of upbeat melodies to songs that would otherwise be dour and melancholy. He'll build a skeleton around menacing bass and snapping drums, and then bring a bright guitar note in at the hook to add dynamics. Sometimes he'll change the song up completely. "Fuck You Mean/Composure" changes direction a third of the way in. "Scrilla" references Beenie Man's "Sim Simma" and Redman's "Who Am I?", but then veers off into its own direction at the end of the song. Wara keeps the album from being too downbeat, and injects his music with a healthy dose of soulfulness and optimism.

Unlike many great producers, Wara is actually as good in front of the mic as he is behind the boards. Lyrically and in terms of delivery, he treads the line between arrogance and pleading, bragging and asking forgiveness. He acknowledges the faults in his personality and lifestyle with self-awareness. On "Slangin," for example, he takes the role of his older brother telling him the downside of the life of a drug dealer. On "Beige," he uses the color as a metaphor for his skin tone and the color of crack rocks. On "Annoyed," he raps about how much he likes a girl and how much she annoys him. "Scrilla" and "Fuck You Mean/Composure" both detail life in the streets, a life full of fatherless children who are doomed to die before they are old enough to drink.

As he explains on "Slangin":

"You know what the streets do?
The streets breed assholes
Who sit around with frowns contemplating cash flows
Have their mommas paranoid
Waiting for phone calls
Like 'Mama I'm in jail'
Or 'He's as dead as a doorknob
Most kids around here they don't live past 21"

The standard template for rapping about street life is to have nine songs about how awesome it is to be a gangster, and one song where the rapper apologizes for all the trouble he causes. Wara manages to give both the good and bad in each song, laying out why people fall into the life (namely lack of role models and lack of other opportunities), and the fallout from the life. The payoff in fast cash and women is always overshadowed by the very real threat of death and jail time. And it's not private jet money he and his co-conspirators are making. He's not in the game to buy a Maybach or get a black card, he's in it for new sneakers and a new Hilfiger outfit.

Wara isn't the only rapper who pays tribute to the mid-nineties in his music and rhymes. There's a generation of younger rappers who are digging deep into album collections of their older brothers and parents for inspiration. Rappers like Joey Bada$$ and Vince Staples who make rap music that reflects an era when the music was all about substance with style rather than style with no substance. These artists aren't being slavishly retro, however. Wara's music may nodd back to the era of beepers and Cross Colors, but it's not frozen in amber. His lyrics are as much a product of this age of social media oversharing as they are a nod to the Queensbridge sound. It's hard to imagine a rapper from 90s Brooklyn being so upfront about their faults and so unconcerned with acting tough. Wara uses old school sounds as a jumping off point, not as a set of rules to rigidly adhere to.

"Kidnapped" is a well-thought out and fully realized album in the vein of "Reasonable Doubt," "Illmatic," and "The Infamous." Every note and lyric seems carefully placed, and there is not a single tossed off track on the album. It is a banging, thought-provoking album, and one of the best debuts in a long time.