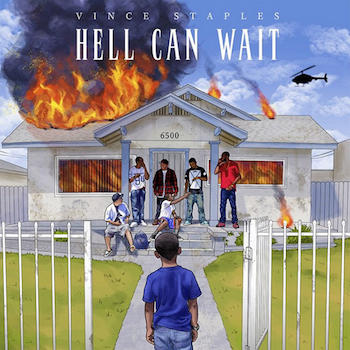 They say that you are a product of your environment. "Hell Can Wait" embodies this; Vince Staples' debut EP evokes a kid coming into his own, with the difficulties of the ghetto underlying the regular trappings of ho's and bankrolls. As a young man who grew up in the meccas of West Coast rap, his music harkens to socially-conscious thug themes reminiscent of Tupac and N.W.A. Here's a gangbanger who's been in the game a minute and fully realizes the damage he causes.

Is he jumping aboard the protest following Ferguson regarding police brutality? Yes, "Hands Up," (produced by No I.D.) as a single does seem suspect to the trend. But there is more genuineness in the work when the EP is taken as a whole with Staples' persona as a "sensitive" gangster-rapper. He's simply noting the fear that people who dress a certain way and live in certain areas have for the police. The timing of the single, which dropped less than a month after the Ferguson shootings, is more a reaction to the event than following a fad. In fact, Staples scalds the thirsty hordes amassing Twitter fans off the heat of a tragic incident, with lines like, "This is all a part of Huey P and Bobby prediction, making profit off of violence they arousing attention."

The repetition in "Blue Suede" reminds us of the monotonous grind of what a gangsta's life is really like - all that sacrifice when "all I wanted was that blue suede." Suddenly he's just the boy in Langston Hughes's story who turned to the fast life because there was no kind Mrs. Bates. Standing on the orator's podium, Staples is preaching to kids to stay clean, stay in school, all the while "dodging (his) conscience" about packing a 40 ("Feelin' the Love").

The fact that it requires a poetry-style analysis to fully dig into Vince Staples' viewpoints speaks spades for his skill. Yet, the mark of his origins runs deep. The conflicting messages of living an emotionless thug life while trying to be a positive voice for the people, reflects the muddled transitions of a young artist - after all, he's barely legal to buy the shots he raps about. The only thing to do is to wait and see, if this promising young rapper will follow in the footsteps of Tupac or Talib Kweli.