Reds :: Raiders of the Lost Art :: Soldjasoulz
as reviewed by Matt Jost 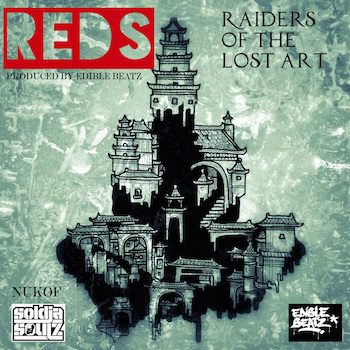 The Indiana Jones pun is one of the better ones in hip-hop chronology, but it's already twenty years old. Producers Sam Sever and Adam Gazzola likely originated it when they doubled as Raiders of the Lost Art in 1993 with a Big Beat 12" that was dedicated to (quoting from the record's label) 'The pioneers of hip hop (too many to name) who paved the way and did what they did for the love of music... not money! They're too often forgotten.' Only one year later some of these very pioneers gathered on the better known compilation "Raiders of the Lost Art," signalling a phase of comeback attempts from old school groups such as Treacherous 3, Fearless 4 and Whodini.

It's not entirely clear which period Reds refers to. Probably the more distant past in general, although these days in hip-hop that extends well beyond the 1980s. Still, as a self-professed "student of that lost art," he's familiar with hip-hop's first generation, dropping names like Soulsonic Force, Fab Five Freddy and Crazy Legs during "Raiders of the Lost Art." Last time around we heard him with DPF, his rhyming partner in the cleverly named Soldjasoulz. For his new solo EP he draws on Dutch DJ/production team Edible Beatz, who give his music a complexion that is significantly different from the minimalistic keyboard sound of "Soulz of the Storm." Crate diggers at heart, the trio of P-Trikz, Kai and Relski provide melodic boom bap bangers laced with a considerable amount of vocal cuts.

The EP begins with a nostalgically colored loop, then the beat shakes the dust off and continues with the same musical sway, only crispy clear, as Reds is off on his great adventure:

"We study sacred ways of the ancient
Buddha cloud thick, you can taste it
Sound so smooth, it's persuasive
Food for the brain
Let me tell ya 'bout the grain
- cause yo, we go against it
Still doin' our thing, it's all gorgeous
Stayin' off grid from the tourists
Underground performance flawless, victory recorded
[...]
Back to business, back to basics
In the Temple of Boom we study pages
Undiscovered chambers, buggin' off the fragrance
of the parchment, words of the masters, worldly departed
Verses we craft in fat markers, black market
Chat jargon in the back with my hat slanted"

Now I'm not automatically susceptible to the 'Good old days' mentality, but the image of younger heads embarking on a fascinating journey to discover ancient treasures and traditions of hip-hop is undeniably endearing and surely a portrait many, myself included, can recognize themselves in. At the same time I emphatically question the tendency to lump it all together to the effect that 'the old days' seem simply 'good' in general.

Either way "Lost Art (World of Hip Hop)" continues imperturbably down that road, this time the cuts taking the lead, followed by melodically even more intense, almost sentimental instrumentation. Conversely Reds' lyrics are less meditative and his dense flow gets a bit trivialized by a slightly thicker drawl. "From the marshland, hard slang manuscript" sums it up quite appropriately. "Pull Up" changes the tone at last musically with a choppy, rock-influenced beat. Lyrically Reds is on the same vibe, furnishing his verses with lines like "Old school on the reel [/real] like pause button mixtapes" and "Sound retro like hissing on a tape / Dig crates, blow headphones listenin' for breaks." DPF joins him on the second verse, which suggests that this could have just as well been a Soldjasoulz project:

"Catch the vibes, so fresh, your finger pasturized
Take it back to 199something, bring it back to life
Flash your lighters if you like it when a rapper's tight
Back before the swagger and the cash was all that mattered, right?
A pair of battered Nikes, oversized baggy jeans
Nothing in the pocket but a big old bag of weed
That's all a rapper needed - that and a bangin' beat
Back when gettin' pressed on the wax was every rapper's dream"

Equally representative of the lighter side of sampling-based hip-hop, "Life in Focus" relies on jubilant, funky horns and sees Reds giving his message a decidedly positive spin. With the breezy "The Essence" he serenades his soulmate, adding another dimension to the short release. The following tracks are enjoyable, but I wonder if he couldn't have come up a local equivalent of the title "Fly Ebonics" and on "100% Raw" his friendly voice and casual flow don't match a hundred percent with the martial imagery. The closing "Hundred Hand Slap" finally has you thrown all the way back to 1993 and gives a special dedication to the DJ's.

In short, "Raiders of the Lost Art" is the kind of release that quotes rap songs to define a relationship with a significant other, and of course it also samples the infamous song that worked the other way around, Common's "I Used to Love H.E.R." If you feel like a slice of traditional and trustworthy hip-hop with a UK twist, Reds' EP is yours for the downloading.