:: My Music Records
as reviewed by Grant Jones 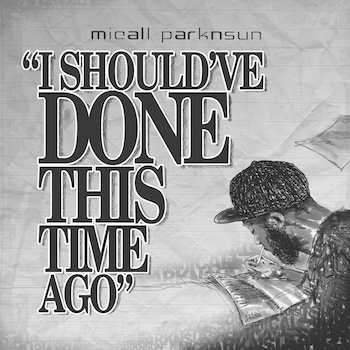 That's not a grammatical error in the album title - that's how we speak in the UK. I love the healthy banter between Americans and Brits when it comes to the English language, whether it's over why some use football for soccer or pronounce "Z" as "Zee" instead of "Zed". Or hearing aluminum pronounced without the latter 'I'. Anyway; before alienating and aggravating each and every English-speaking reader of ours, I'll explain why Micall Parknsun has named his album "I Should've Done This Time Ago".

Micall is one of the most reliable, amiable emcees working the UK, stepping out of mentor Jehst's shadow to release some of the better examples of UK hip hop. He's always come across as a genuine, level-headed adult that is proud of being a family man yet is always drawn to his addictions - hip hop and smoking marijuana. Thankfully, he doesn't spend all of his time on the mic spouting how fantastic it feels to blaze one up, if anything he is one of the most respected in England because he makes what is often coined "positive" or "conscious" hip hop. "I Should've Done This Time Ago" is a statement from Micall that he is losing patience with the current state of hip hop, as this album is noticeably angry and reflective.

There is more of an upbeat stance on "Land of the Lost", a song that has an infectious sample of what can only be described as a buzzing fly that's groaning. Even the insects in the studio are pissed off. Micall has to "Calm Down" by track nine, aiming his message at youngsters putting hustle over everything. It's ultimately a hollow song with simplistic lyrics, something that is often Micall's strength. That's not to say Micall is an emcee with basic ability, but in a genre still obsessed with wordplay and abstract lyrics, it's refreshing to hear somebody share their thoughts in plain, direct English.

This isn't one of those albums that yearns for better times, but one that gives you a sense of hopelessness and despite claims of having no regrets on "Xscape", there's a feeling that Micall finds it hard to drum up motivation to keep recording when there's practically no chance of reaching an audience outside of the hardcore hip hop fan. "Sick of This" follows a similar theme, highlighting Skrein and Jehst's feelings of being fed up with the state of the industry. Let's be brutally honest, none of these guys are going to dent the charts, and I wouldn't be surprised if they garner more success in mainland Europe. Given that the UK speaks English, it still alarms me that hip hop artists are so severely overlooked. The live circuit is alive and well, thriving even (just look at the success of Boom Bap Festival) - but there's still a feeling that the scene is stuck in the dreaded "New York" sound of twenty years ago.

Micall Parknsun has always been a guy that's managed to avoid this stereotype, largely because he approaches tracks with a grown-up perspective and doesn't rely on beats with scratched hooks. His earlier albums such as "Working Class Dad" emphasized the family man and promoted a positive lifestyle (as long as you ignore the recreational drug usage). 2012's "Me, Myself & Akai" was arguably his best work, maintaining a consistency his previous records often lacked. With "I Should've Done This Time Ago", Micall is still the lovable rogue with one hand on the microphone, the other on the washing up - but he's clenching that microphone tighter, and scrubbing the paint off of the fucking mugs. He's pissed off, and while it's not on some M.O.P. level of anarchy, it has leant the album a certain edge. Unfortunately, it's not THAT different from his last album; solid, knocking production and largely simplistic, linear themes. Sure, he's a bit pissed off, but for the most part, Micall already did this album time ago.