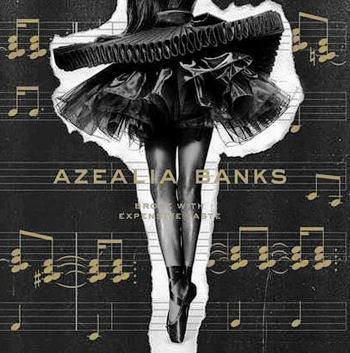 There's a strong chance you may well have entirely missed this album. It was released about five weeks ago, with little fanfare, and it was widely assumed that it would never see the light of day. And now, just in time for Women's Week on RapReviews, comes a dark horse that mixes Missy Elliot, Lil Kim and M.I.A. into an intoxicating mix that may well be the best album by a female rapper for a good little while. Wildly swerving lane to lane, Azealia Banks is an excellent singer, a technically gifted rapper and a fascinating artist. Due to "Broke With Expensive Taste" being so overdue, it occasionally ends up feeling more like a collection of every worthwhile recording she's ever done (subsequently a touch too long) but for the most part, it's akin to a DJ mix, a smorgasbord of interesting flavours over the past three years.

At times, Banks is clearly just "rhyming for the sake of it" - this is more about fusing with the beats, obsessive wordplay and feelings more than emotions. She rips into songs like "BBD" and "Young Rapunxel", with "Chasing Time" offering one of the few tracks that offer any insight into her more sensitive side. But she's only 23, there's plenty of time for that down the road - on BWET, the Harlemite is exploring hip hop, house, garage and UK bass amongst other genres. Stitched together like "Matangi", Banks' joint has a visceral thrill - this should be played at high volume, preferably in a residential area.

It's a good sign that "212" barely merits a mention here: yes, it's a great song but it's three years old now, and is surrounded by a bunch of newer, fresher, far more exciting and present tense songs. A few songs don't quite fit the bill ("Nude Beach A-Go-Go"), but the vast majority hit the spot with aplomb. "Idle Delilah" is a key- shifting joy; "Ice Princess" is challenging but hugely rewarding; "Desperado" brings M. J. Cole back (always a pleasure). In general, the standard of production is quite superb - if you're bored of the general malaise in rap beats that all sound the same, this will defibrillate you accordingly.

In the booth, Azealia hugs the mic nice and close, leaning in with sinister intent - even when she's just messing around. BWET is a fascinating starting point, as she can spit complex rhyme patterns with ease. The hope is that this can progress into something deeper, but as things stand she's still a pleasure to listen to. Meshing with the beat, she rides atop one minute, jumps in the next, and sings with purpose and force. Perhaps over the years, she's been a touch too abrasive (massive understatement) getting into beef with pretty much everyone in sight. However, now that "Broke With Expensive Taste" has finally seen the light of day, it at least justifies the initial excitement. It's a wonderful album with many layers, be they musical, lyrical or conceptual. The main star of the show is Banks, her wordplay and the brilliant production. Now that she's getting love for BWET, it's time to step up to the next level - work with the world, not against it. Get into the true flow of things, see where the current takes you, become one with the river. Swimming upstream sucks, and it would be a tragedy - especially after this - to see Azealia Banks waste away due to her reputation preceding her. The stakes are too high.