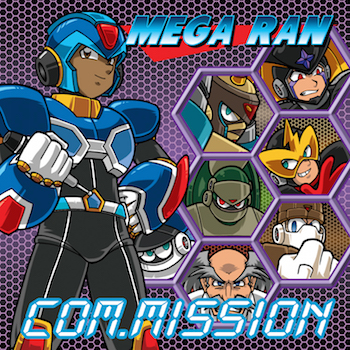 That moment has now arrived.

It's a minor moment overall - just a two minute blip in the nearly 40 minutes of "Mega Ran Com:Mission" - but it shows that Ran is feeling the artistic freedom to branch out and try new things. It doesn't hurt that this album was offered as a bonus to Kickstarter backers for his "Mega Lo Mania" documentary. That's not to say Ran wouldn't have recorded and released this album anyway, but with 315 backers and nearly every announced stretch goal reached, Ran was definitely feeling the love as he went in the studio to record and release this album.

game from 2004, but the content of the album isn't tied strictly to that (relatively overlooked) Mega Man title. Instead the music and samples run the gamut of the entire Mega Man series, from classics Mega Man 2 sounds to cornball dialogue from the Mega Man Complete TV Series

(now available on DVD). One of the dopest tracks is "Got You," featuring a guest appearance from Jermiside.

For that classic old school feeling though, fans of Ran will be all about "Get Ready, Get Set, go!"

"I'd be a fool not to recognize
that I would be nothing if it wasn't for the mechanized
blue guy, who died so that I could live
Now he's resurrected, y'all know what time it is
The most prominent, dominant, occupant
Build him a monument on every continent I'm co-signin it
No empty promises, we stand together
Let 'em know it's Mega Man forever"

For my money though (as a backer who received this album in time for Christmas) it's got to be tracks like "Gravity," which hint at the robot stage and game they come from (in this case Mega Man 5 for NES) but chop it up so expertly that you've really got to be paying close attention to the sample to hear it - the creativity of producer K-Murdock being shown to the fullest.

This album recaptures the sense of fun and whimsy that Random had when he first debuted the Mega Ran persona, which has since become a predominant part of his recording and touring career. He's branched out to do non-Blue Bomber albums and not become pigeonholed, and you can feel that dichotomy on tracks like "Family." Even though the Mega Man sample is still at the heart of the song, he reminds us all that there's more to the man than the 'bot.

"Before Mega Ran people forget, there was Raheem
Teacher/Rapper never lost my dreams
I filled up like 20 composition books
with mad rhymes - with missing hooks
Never was my strong suit; high school was tough
mainly cause I tried to force into the wrong group
'Til I decided I was standin out
Handed in papers, now they like to hand 'em out"

That's how Random succeeds - not just by rapping about his favorite games, but by rapping about his personal losses and gains. Few rappers have cultivated the relationship that Ran has with his audience - it's almost psychotherapy at this point - admitting that when he's "down and out" that's when a fan purchase reminds him it's all worth it. And that's how Mega Ran will continue to succeed, whether his songs are inspired by Capcom titles or not - that honesty with his listeners. He struggles like we all struggle, but Ran always perseveres from one album on to the next.