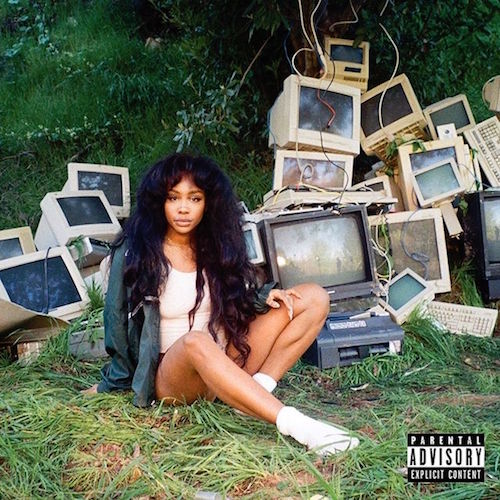 Twenty-one years ago, Janet Jackson released "Control." The album dealt with a failed marriage, Jackson separating herself from the business control of her father, and coming to her own as an artist and a woman. To Jackson, control meant getting what she wanted and calling the shots. Some of those themes are echoed in SZA's (New Jersey singer Solani Imani Rowe) album "Ctrl," although the twenty-teen version has abbreviated the word "control" and features an artist who is either shakier in her confidence or feels less of a need to force bravado, depending on how you read it.

SZA first came to my attention with her excellent 2014 EP "Z." On that EP I felt like she was great when she was going in a trip-hop direction but struggled with the more conventional R&B songs. "Ctrl" goes much more in an R&B direction, and she absolutely nails it. The album opens with "Supermodel," a kiss-off to her ex-boyfriend, that contains the kind of complex, subtle genius that has made Frank Ocean a critical darling. She starts off full of attitude:

"I'm writing this letter to let you know
I'm really leaving
And no, I'm not keeping your s--t
Heard you got some new homies?
Got some new hobbies?
Even a new hoe too?
Maybe she can come help you
Maybe she can come lick you after we're done
What's done is done?
I don't want nothing else to do with it
Let me tell you a secret
I been secretly banging your homeboy
Why you in Vegas all up on Valentine's Day?
Why am I so easy to forget like that?
It can't be that easy for you to get like that
Oh no she didn't?
Ooh yes I did
Oh no she didn't?
I'll do it again"

She immediately goes from calling him out to confessing a deep level of insecurity, and admitting that she still wants him:

The theme of not being pretty enough comes up again on the excellent "Drew Barrymore." "I get so lonely I forget what I'm worth," SZA sings, and later in the song sings, "I'm sorry I'm not more attractive/I'm sorry I'm not more ladylike/I'm sorry I don't shave my legs at night." What SZA gets so right is the fact that often the facade of attitude is a shield that we put up to protect ourselves. Paradoxically, in admitting her weakness SZA makes herself (or at least the SZA in her songs) stronger. Anyone can pretend they are tough. It takes courage to admit that you are flawed.

Production is handled by Scum, ThankGod4Cody, Carter Lang, Bekon, Frank Dukes, and Cam'Obi, among others. The album is probably best described as alt-R&B, in that it is clearly R&B but coloring outside the confines of that genre. There's a clear line between someone like Mary J. Blige and SZA, but you can also understand how she sees Bjork as a major influence. The producers wisely choose to understate their beats so as to give SZA's voice and personality space to shine. There's not too much polish on any of the tracks and for the most part the musical template is tastefully subdued. Several tracks ("Supermodel," "20 Something") are built around guitars, similar to CS-W's work with Ivy Sole. Others are more clearly trap influenced, but steer clear of the bombast typically associated with that genre.

It's a testament to her skills as a singer that she manages to outshine all the rappers who appear on the album, no small feat given that one of them is Kendrick Lamar. Isaiah Rashad probably comes closest to equaling SZA on "Pretty Little Birds," but the match still goes to her.

On "Ctrl," SZA proves that you can be confident yet insecure, sexual yet crave affection and genuine connection, and empowered and still prone to falling for bad boys and all the drama that entails. SZA is the real deal and yet another example of how some of the most interesting, complex, sophisticated art being made today is being made by R&B artists.