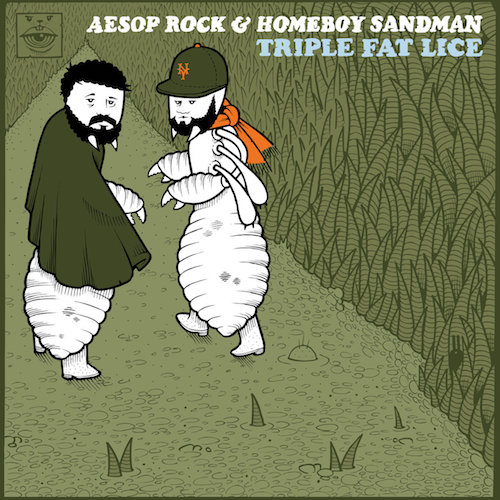 "They don't make enough tie dye my size
People wondering 'What race am I?'
Yet they built a Aes and I shrine
Taxin fools like H&R Block
+Agent Orange+ get your A&R shot
Space to +Rome+, like the Italy spot
Bitter critters get at me for diddly squat
Stop! I point out if not they're being tasteless
All your faces at the base of my... yo" - Homeboy Sandman

The oddity of Aesop Rock and Homeboy Sandman team up comes not from their background as both are New Yorkers (even though Rock moved to Portland, Oregon) or their background as indie rappers (a slew of highly acclaimed albums between the two of them) but from their desire to give each project away free. It's certainly not beyond the realm of expectations to think that two beloved indie rap favorites in their own version of a supergroup based on a parasitic insect could sell more than enough copies to recoup their cost. There may be some some intentional self-deprecation in naming their team and album series "Lice" though, as though they feel they're simply living off the debris of hip-hop's collective skin without deserving it. I don't find that to be true but if their humility about it makes them feel obligated to give away "Triple Fat Lice" for free then I'm not going to question them too much over it.

(It's worth pointing out they DID list some worthy charities that you could donate to in exchange for getting the album free. Please feel free to give them a look before, during or after this review. You're under no obligation though and the album is still free either way.)

Although Aesop Rock could have easily handled the production for this or any of their team-ups, part of the fun for him has to be outsourcing it to dope producers and giving him the chance to rap with Sandman and not worry about it. It's the lack of pressure that gives them the chance to be unusually honest on songs like the Ben Boogz produced "Pizza and Burgers."

Sandman: "Yo, I'm nervous that I've said too much
Involvement with my promo budget ruins my mystique
Something like that shouldn't matter cause my s--t is tough
But unfortunately most of y'all are f--kin dweebs
I think this site reviewed my record off the snippets
It figures that on Twitter that's the one that captures interest
I swear these sites will give a job to any doofus
Dont need to say they name, cats is f--kin useless"

Aesop: "Ay, somedays I forget to not get stoned before my therapy
Doctor said it wasn't fatal, mostly just embarassing
Meh, talk about trials of the errant
Every second at the pen is like a fire to the penant
Every breath is alive with a dying message
Letter to the editor inscribed in his weapon
I ain't buyin what they sellin
Just might climb into the vellum, tell 'em"

This brings up a point that was probably obvious to those long familiar with either man but just might need to be stated to first timers - neither man is afraid to go over the heads of their audience. Sandman and Rock refuse to shoot low. They prefer to go high and assume that listeners will meet them on their level, and if they don't it's their loss. "Solstice, equinox, off to date a stripper/so slick, when it's raining, I don't need a slicker/screening phone calls, seldom do I pick up/contravening cornballs and selling corn liquor" quips Sandman on "Yohoo" before bragging "my name is written in a language you could never say/my height and weight make up the number that you better play" all to a bugged out funky backdrop by Quelle Chris. Even though what I've unofficially dubbed "Lice Three - Buggin' Out Harder" is only 18 minutes long, the sheer number of times you'll hit rewind to catch punchlines and hit replay to listen to songs again doubles it. In fact you might as well make your own playlist and put all three back to back for one hell of a self-made album. I could listen to them do their version of Phife and Q-Tip on "Pins and Needles" all day long, but most of the rest of their songs together are just as strong. If you liked either one individually you'd like them collectively twice as much, but if you are the type who thinks Aesop is too nerdy or Homeboy is too monotone, then you're twice as likely to pass on this one. That's the other upside of it being free though - besides keeping both emcees humble it also keeps them from taking how little or many plays it gets personally. I expect it to get plenty.