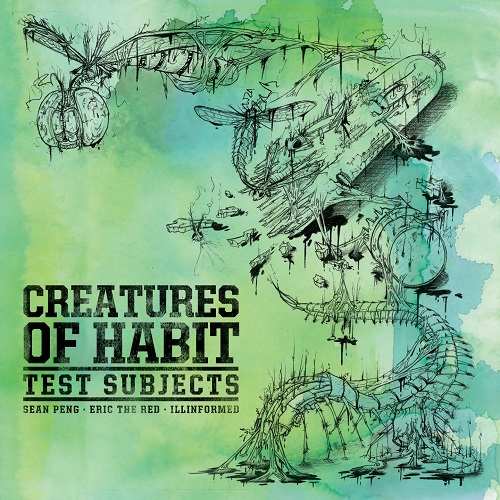 Even the most unworldly weed smokers know that in this day and age their rebellion is in danger of wearing thin and their coolness is liable to wear off. On one hand today's youth leans towards more optimized lifestyles that either include no intoxicants at all or a wide array of chemically designed drugs, on the other hand the consumption of cannabis for medicinal and recreational purposes has become widely accepted. The legalization lobbying is finally paying off, and even though rap music was not necessarily at the forefront of the political battle, it was nonetheless a persistent voice that sung the praise of the plant in countless songs.

Sticking strictly to that script, British rappers Eric The Red and Sean Peng and producer Illinformed are Creatures of Habit, whose 2016 album "Test Subjects" follows the old storyline that goes a little something like this: We're really crazy for Mary Jane, but don't confuse it with the kind of crazy that comes with the consumption of all those other drugs. Don't expect absolutely clear lines to be drawn, though, because the asserted level of addiction requires that the trio goes to extremes to feed its habit. So "Test Subjects" cannot do without borderline boasts like "A real fiend, ain't seen nothing like me / Always looking for the dope like an old junkie."

So at least Creatures of Habit are not yet ready to give up their misfit ways and join the mainstream marihuana movement. Opener "The Itch" establishes them as veteran hardcore tokers, and despite Eric The Red's strident vocal tone the track, with the help of Illinformed's smoothly navigating beat and Sean Peng's measured flow, dispenses a superior flair. Proving to be social smokers, by track number 2 ("Roll at Dawn") they're already joined by Jack Jetson, BVA, Leaf Dog, Smellington Piff and O.A.B (the latter two also making up an outfit named NLP together with Eric and Sean). Illinformed shifts strings into a disarray that is likely to sound harmonious to hip-hop heads growing up in the late '80s and early '90s. Still familiar but more generic is the string section in "Mucky Mouth," another posse cut.

The two rappers do well to perform as a duo to strengthen their chemistry. "Hacked Gack," backed by a swinging horn section, is a good example of the contrast between stream of consciousness (Eric) and train of thought (Sean). They find obvious common ground during further smoking episodes ("Adventures of Shroomlock & Dropsome," "Too Stoned"), but they also explore topics like anxieties ("Living in Fear") and greed ("The Corrupt"), sort of representing the clear-sighted effects of mind-altering substances. They get downright political in "Still Can't See," a middle finger to the ruling class set to wailing jazz horns.

It stands to reason that Creatures of Habit perceive themselves not just as "Test Subjects" because of any self-experimentation with drugs but also because they are socially treated as such by the establishment, government, etc. At least they hint in that direction with closer "Superstition," which unfortunately lacks clarity and completion. What they're pretty clear about is their stance on drugs they view as more dangerous than weed. Sean Peng sings the booze blues on "Bottom of the Bottle" (to yet another gorgeous swing era loop), and warns urgently about "the wrong concoction" that will leave you "feeling rotten with a body full of toxins" in "The Vices," an anti-drug message from two men who may have been there and done those particular drugs.

Since drugs affect one's psyche and perception, it comes as no surprise that Creatures of Habit delve deeper into these issues - while avoiding references to their drug of choice. "Let Yourself Breathe" manages to be uplifting despite potentially emerging from a depressed emotional state, and "Self Portrait" is a successful attempt at metaphorical lyricism. "I learned my lessons from accepting imperfections," offers Eric, before name-dropping Oscar Wilde's Dorian Gray, while Sean supplies one of his finely chiseled verses:

"Misshaped face, call it Picasso masterpiece
Sit here for days, unraveling the tapestries
Captivate the canvas with these analogies
Stare into the blankness to find my normality
A crazed artist known to decorate the parchments
I'm plotting the blueprint like a strange architect
I carve an etch, my pictures are far-fetched
I'm drawing on the desk and so my name I left
I'm out my depth crusing in the water colour
I learned from my mistakes like I never had a rubber
Distorting shapes of my self-portrait
I explore the illusion as my form of escape"

"Test Subjects" is by all means a traditional record. It has more predecessors than it will have successors. But old habits die hard, and Sean Peng and Eric The Red have not only found their poison but also the music that allows them to deal creatively with life's little pleasures and existential woes.