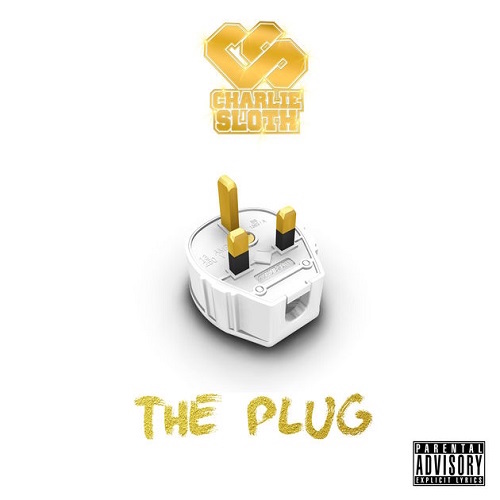 Almost ten years ago Charlie Sloth introduced himself to me as an amateur of UK rap in the best possible sense - someone who loves the genre enough to remind people - notably in the midst of Dizzee Rascal (with Calvin Harris), Wiley (with "Wearing My Rolex") and Estelle (with Kanye West) crossing over to higher levels of recognition - of the legacy of the rap scene of old. He did so with "Can't Forget About UK," an encyclopedic, loving homage to the pioneers, a number of which RapReviews.com has covered in the context of our annual UK Month.

Sloth's own rap career stalled after a couple of mixtapes, instead he was able to establish himself as a fairly powerful radio personality, essentially succeeding rap radio institution Westwood on BBC Radio 1. "The Plug" is his full-length debut as a producer. At least that's the claim, even as it's nowhere explicitly confirmed on the actual release. Without wanting to question Charlie Sloth's contributions to this record in detail, Miami's DJ Khaled does come to mind, as the suggestion seems to be that like Khaled has the 'key', Charlie has the 'plug.' Apart from a recurring producer tag in a toddler's voice, he keeps silent and doesn't vocally penetrate songs with his personality. He seems to interpret the producer's job the old fashioned way - direct instruments and vocals, inspire songs, create records.

Together with his numerous collaborators he came up with 22, at least a vague hint at the 2000's megalomania of which DJ Khaled is one of the last survivors. Regardless of whether he would have featured higher-profile guests if the budget allowed for it, the various pairings don't play out like a lottery in hopes of hitting the airplay jackpot. "The Plug" could just be more matter of the heart than fodder for the charts. With a soundscape that leans towards pop and trap, it nevertheless caters to today's audience that prefers a kind of rap (and R&B) that is a little bit different from the one celebrated in "Can't Forget About UK."

The album can roughly be divided into more melodic tunes that explore Caribbean and African connections, and a sinister, stoic blend of American trap and British grime. The sequence is rather random, as you'll find "No Noise," hard-nosed, heroic trap rap in the vein of Jeezy from Sheffield's Skinz and London's K Koke, caught between Nigerian transplant Lola Rae's futuristically tropical "Pull up on You" and "Angelina," a collaboration between West African vocalists Lil Kesh, Olamide and Not3s joining for this slice of global club music skitter.

On the R&B end, you could certainly expect a little bit more from the line-up of Sean Kingston, Spice and Lady Leshurr (of "Queen's Speech" fame), who can't escape the cold clutch of "What Can I Do." West London trio WSTNR fare much better with opener "Take What's Ours," musically a throwback to the Scott Storch era where everything comes together from hard drum breaks to lightfooted percussion to form a track that is so professionally produced that it is able to satisfy popular tastes without losing every edge. Club needs are catered to with Nottingham's Young T & Bugsey "No Pictures," which despite obvious tendencies is still some degrees away from Nafe Smallz' very contemporary American "Did This on My Own." Not unexpectedly, Wolfie stands out with "Think About Me," which is undramatic and unpretentious in a '90s R&B way.

The tracks that focus on rap confirm that as a producer, Charlie Sloth isn't bent on breaking new ground and prefers that his tracks stand on firm ground instead. You know what you get with Giggs, who is featured twice, on the short, almost 3-6-ish "Wake Up" and alongside Potter Payper in "We Dem." As special as Giggs is, there's no denying that others paint in the same bleak strokes. In the realm where releases like "The Plug" operate in, there comes a point when the only distinction is that one song sounds more American (Clue's "Liars"), and the other slightly less (Fredo's "UPS"). As far as overseas features, "Gang" does little for UK/US relations by pairing 21 Savage with Hardo, but "Pressure" brings together Ace Hood and Bugzy Malone, while "Look Like" lets Jadakiss go before JMC and Stormzy. Neither is musically up to date and seems mainly eager to accomodate the big names, but at least we have some cultural exchange.

Proponents of the scene in the UK often emphasize that it's not as business-minded and as narrow-minded as in the US. "The Plug" is often missing the free spirit that has also guided said scene throughout the years. Behind the boards, Charlie Sloth is solid, behind the curtain, in terms of pulling the right strings, he doesn't quite display a magic touch just yet. The rap highlights are random and only relatively noteworthy - Bugzy Malone opening up over the power pop background of "#FameGame," Cadet grappling with the demands of the music market on "Kendrick Lamar," Ghetts (AKA Ghetto) unpacking his vocal arsenal alongside the menacing Abra Cadabra on "Running," Aystar reporting from his hectic life on "Therapy," UK-born, US-raised KNYTRO combining his mixed heritage on "Real Hard," and the odd tag team of Avelino and Mic Righteous proclaiming, "It's a new generation" on "Take it All."

After being vocal for the better part of his career, Charlie Sloth's tenure away from the mic results in an album that endorses the variety of the UK's urban scene, if not necessarily its genius. The rapper turned presenter turned producer clearly understands the music he devotes himself to and the musicians that help him realize his vision. And his album comes without excessive self-promotional baggage, commendably focusing on the music. On a personal level, he spoke to my old me with "Can't Forget About UK," and he speaks to the contemporary me with "The Plug."