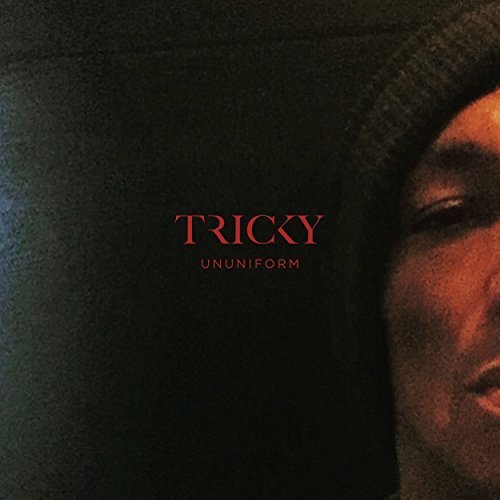 It says something about the trajectory of Bristol producer/rapper's Tricky's career that while 1996's "Pre-Millennium Tension" is one of my favorite albums, "ununiform" is the first new album of his that I've listened to in almost 20 years. After producing two brilliant albums he stumbled with 1998's "Angel's With Dirty Faces," and kept on stumbling. His restless genre hopping led him down some dark roads, including glossy Hollywood rap/rock, mediocre alternative rock, indie pop, etc. It's hard to blame him. His early work was claustrophobic and dark, not exactly the most expansive sonic palette to work with. You can understand the guy wanting dabble in less depressive sounds. The last decade has seen him put out a series of rushed, half-hearted efforts that were more geared towards paying his debts off than making great art. Now debt-free, "ununiform" is the first Tricky album in a while that he made for the love of making music.

Part of the challenge with Tricky albums Ęis that the collaborative nature of his music means that there are often jarring variations in genre and style. "Ununiform" is more focused than some of this previous releases, but it is still multiple singers and rappers performing on tracks that range from stripped down soul to trap music to indie pop to people rapping in Russian and Kazakh. Tricky's croaking voice and a dank, claustrophobic atmosphere are running threads throughout the album, but even then not on every track.

To his credit, he knows how to pick collaborators. Besides the aforementioned Russian and and Kazakh rappers, he works with singers Francesca Belmonte, Mina Rose, Asia Argento, Avalon Lurks, and Terra Lopez. Martina Topley-Bird, who was featured on Tricky's early albums, gets the honor of singing on the best track on the album, "When We Die." It is a gorgeous, gloomy meditation on death that stands up with anything in Tricky's back catalogue.

Like a less hypersexual Prince, Tricky is able to truly collaborate with the women, and they make his music stronger because of it. While the beauty of his female collaborators' voices is a nice contrast with the dourness of his music, their voices also echo the feelings of sadness and isolation that Tricky's music often conveys. They are telling their own stories, not Tricky's story. In an age where female singers are often used just to add some cross-platform sex appeal to a male artist, it's nice to see Tricky giving the women he works with more equal footing.

The album worked best for when it paired Tricky's unique beats with female voices: The folky R&B of "New Stole" and "Doll"; Ęthe beautifully dark "Wait for a Signal," "Running Wild," and "When We Die"; and the electro-pop of "Dark Days" and "Armor." ĘThe songs with male rappers connected less for me. I wasn't totally feeling Smoky Mo's Russian flow on "Bang Boogie," although I enjoyed the 80s synths. The trap-influenced "Dark Days" has an interesting beat, but is hobbled by lackluster lyrics.

A sour notes aside, I found myself enjoying "ununiform." Tricky isn't trying as hard to be all things like he was at the turn of the millennium, and he's not phoning it in to pay the bills like he's been doing for the past few albums. He's making music for the love of making music, and the results are pretty satisfying.