:: Altered Ego/Pickwick
** RapReviews "Back to the Lab" series **
as reviewed by Grant Jones 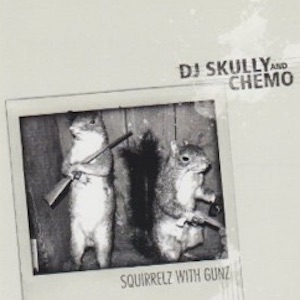 2007 was a great time for UK hip hop as there was something for everybody. Champions of the genre such as Sway and Foreign Beggars still garnered attention from the wider, non-hip hop audiences, but there was a new wave of emcees and producers coming through that were able to add something different. Triple Darkness, Kyza and Kashmere brought that darker verbiage with moodier production, Verb T, Dr Syntax and Sonnyjim brought an element of fun to their downtrodden styles, and Lowkey was killing it with Akala in terms of delivering a militant message to the listeners. The only factor missing from these artists was that willingness to cater to a mainstream audience outside of hip hop, which inevitably fell on Professor Green and Plan B's laps. As for the producers, there was a vacancy for "Best Hip Hop Producer" ever since Lewis Parker stepped off the concrete at Heathrow airport to relocate to the U.S.. Enter Chemo...

With that brief summary of what was going on in 2007, I thought it was time that this compilation highlighting Chemo's talents was worth revisiting. I bought the CD at the time of release, not just because I like the idea of squirrels with guns; I'd heard the song "Heresy" on a radio show hosted by hip hop legend Disorda on suspect-packages.com. "Who the fuck is Disorda?" I hear you say, to the bemusement of thousands of Brits. Disorda single-handedly maintains Suspect Packages, the primary source for UK hip hop that's been running since 1996. Think of it as Fat Beats for London. He's been supporting the scene harder than many of the artists, also playing the latest and greatest UK hip hop before anybody else. He still does. I think what I love about Disorda's shows more than anything is his genuine personality and unabashed passion for hip hop. He's not got the fraudulent persona that Tim Westwood ended up portraying, or the over the top brashness of Charlie Sloth - he simply lets the music do the talking.

Chemo's productions were all over Disorda's show in 2007, a year that also saw the arrival of Beat Butcha (who has gone on to work with Canibus) - a producer who possesses a similarly thumping, apocalyptic edge to his beats. Both producers worked with guys pushing that Wu-Tang Clan style of hip hop - the Triple Darkness camp in particular (Butcha and Chemo combined to produce their debut album "Anathema"). I'd always preferred Chemo though, largely because his beats were laced with thick bass and morbid piano jabs - as if Capone-N-Noreaga's "War Report" had utilised some dubstep-infused "whomps". It summarised the frequently wet, depressed state of England, particularly the industrious cities - London artists feature heavily if not predominantly on this compilation.

The emcees involved on "Squirrelz With Gunz" are mostly pissed off, but rarely does it feel forced or overdone. Poisonous Poets are reminding people how they feel forgotten on "Here I Am" while Chain of Command (a short-lived group headed up by Manage, now fronting the group Caxton Press) seem proud to be British on "Not in My Name" but don't want to be associated with anything the government were (or still are) doing in the wars in Iraq and Afghanistan. Karizma even delivers an eye-opening tale of incest on "Karma". Perhaps that's a little sensationalised, but the story of a man fantasising over a beautiful woman in a night club, taking her to bed and swiftly leaving her, only to find out a month later that she has missed her period; then about twenty years down the line, he's in a strip club talking to a stripper and finds that she is the daughter that he walked out on before she was even born.

It's a bold way to start an album presented by a producer, but it is a welcome statement of "you're going to LISTEN to this record". And these squirrels are firing off bangers left, right and centre - Skriblah and M9 bless a depressive instrumental on "Cold", Manage, Foreign Beggars and Skinnyman combine on "Speakers Corner" (a track about the regular open mic event in London that sadly ended a few years ago), and the raucous "Fight Club" by Kyza, a song that saw mild rotations in clubs and hip hop compilation records. Production throughout the middle of the album is consistently thick and satisfying, helping hide some of the sketchy flows and gruff, sometimes incoherent rhymes. CLG's hook on the Chain of Command track "Not in My Name" is a real highlight though, one of the rare moments Chemo's rich sounds are met with equal ferocity from an emcee.

The weaker tracks are often redeemed by Chemo - showcasing how good his sound is by lacing otherwise average rappers Toplinerz with a rampant beat on "New Day", the hollow "5 ft. 7 Part 2" with disappointing verses from Poisonous Poets members Tony D and Therapist; and lacing Mr Drastick with a vicious version of "Give It Up", which utilises a sample that had recently been heard on Reef the Lost Cauze's "Give It Up", and R.A. The Rugged Man's "Give It Up". It's fair to say that it's the first time I've heard three songs with the same name and same beat, released by three different rappers. Speaking of Americans, an odd moment occurs whereby an American emcee sounds out of place rather than natural on "Heard About Me", a jarring Ali Vegas track that sees Ali being drowned out by a beat that's just too overbearing for his conversational verses.

Production is far from flawless on "Squirrelz With Gunz", but is more often than not a pure joy to listen to, particularly if you want a tough, satisfying slice of rowdy hip hop that comes with a message. There are actually two versions of this album - the 2007 original that was mixed by former DMC World Champion DJ Skully, and the "Redux" re-issue that is a compilation of the same tracks (ish). The original is difficult to find now but is definitely superior, while the "Redux" has actually lost a couple of songs. Blind Alphabetz' "Firey Red" (which featured Sean Price) was one of the reasons to own the original and has been lost in the transfer. More importantly, DJ Skully's savage scratching added a brutal, yet necessary link between the tracks. It made the aforementioned "Heresy" by Triple Darkness and "Not In My Name" by Chain of Command have added impact as they were teased to the point of tedium before being unleashed with precise timing. If you can track down a copy, it's well worth investing in, particularly when the UK rarely sees compilations as solid as this in 2014.