Kingpin :: The Initiative :: self-released
** RapReviews "Back to the Lab" series **
as reviewed by Grant Jones 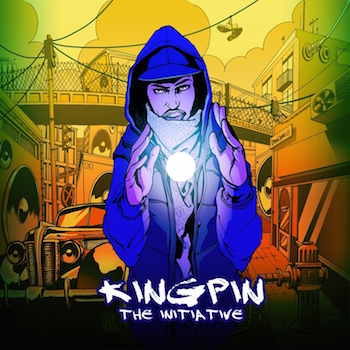 You know that feeling you get when Twista jumps on a beat and his words combine so as to sound like he is saying one long word, every bar? It's a beautiful moment, and one of the reasons why Busta Rhymes' most popular track is "Break Your Neck" (according to hits on Youtube/Spotify at least). There aren't many emcees still doing that rapid-fire rhyming; Busta Rhymes just spits authoritatively these days, and Ludacris has decided that tongue-twisting cameos on pop songs is less lucrative than a movie career. Tech N9ne has got this style monopolized.

Enter Kingpin, an English underground emcee, best known as a member of Caxton Press, a four-man (technically three men, one woman) crew from London led by UK mainstay Manage. He stood out on Caxton Press' debut "Shame the Devil" in 2012, and I figured he would have been dropping solo material since. From a little online research, Kingpin released an album in 2011 called "The Initiative" and judging by his Soundcloud page and the official Caxton Press website, he has left the group. In fact, there is no mention at all of Kingpin even being a part of Caxton Press, so I'm assuming there was some sort of fall out. In my review of the Caxton Press album, I highlighted that Kingpin was the most entertaining member, throwing down a fluid style of rap that had some positive themes backing them up. "The Initiative" follows that format and unfortunately proves that Kingpin is better suited to a group.

Deadly Hunta, the reggae artist who has worked with underground favorite Diabolic, lends his talents to "Out the Box", a track that insists being who you are is now considered thinking outside of the box. This positivity pulsates throughout "The Initiative" as Kingpin shares his honest, uplifting thoughts over some decent production. I say decent as it is largely samey, excluding "When It's Over" and "Get Started" which manage to match Kingpin's presence. He holds down 15 of the 16 songs on his lonesome, an admirable feat for any artist, yet there's a noticeable lack of somebody or something to break up the relentless rapping, particularly when the hooks are all done by Kingpin himself. A scratched hook or a guest vocalist would have been a healthy addition, but I have to take my hat off regardless, as the flow and the rhymes are so well delivered that it's forgivable.

Kingpin can come across as a tad preachy at times, but his refined flow just bobs and bounces along the beats so immaculately that he could be sharing techniques on how to wipe The Queen's anal passage, and make it sound mint. But by the time "Media Hype" closes out the album, the tongue-twisting flow has outstayed its welcome and the final track itself refrains from utilizing Kingpin's unique trait, despite freely admitting that he is out of touch with radio and television, and all he knows about is his flow. You can see why he was chosen to be a part of Caxton Press, because his style is designed to steal songs. Unfortunately, he suffers from Inspectah Deck-ism, in that hearing him drop a dope verse makes me want to hear more, but a solo album somehow feels like too much in the process.