:: Def Jam Records
** RapReviews "Back to the Lab" series **
as reviewed by Grant Jones 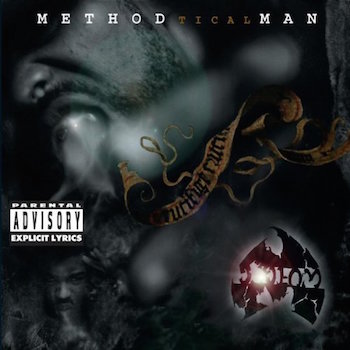 Given Method Man featured heavily on the recent Wu-Tang Clan album "A Better Tomorrow", and is due to release his oft-delayed fifth solo effort "Crystal Meth" in 2015, it's a good time to return to the Ticallion Stallion's debut from 1994. Meth has been a busy bunny, showing up on various television shows, movies and video games over the past two decades, all whilst holding down a successful recording career alongside partner-in-rhyme Redman, and his legendary crew - the Wu. It's no surprise then that Meth has only had four solo albums to his name in 22 years. For most rappers, that's poor, especially when one of those is "Tical 2000: Judgment Day".

Name a great Wu-Tang Clan solo album and you'll get one of two answers - "Liquid Swords" or "Only Built 4 Cuban Linx". Despite being an excellent debut, Method Man's "Tical" remains one of those nearly-classics in 90s New York hip hop that never really appears as much as it should on hip hop album lists. If you ignore Method Man's prominent role in the Wu-Tang Clan, his solo career has been decidedly disappointing. "Tical 2000: Judgment Day" was a bloated mess, "Tical 0: The Prequel" was so polished and bombastic that it defied Method's whole style - rugged and playful; and even "4:21... The Day After" saw Meth trapped, trying to satisfy traditional Wu-Tang fans as well as younger ones (a similar problem Fat Joe faced in the 2000s). Method Man is a team player, and it's clear that he prefers to put his people on his albums when he can. He thrives in company, but outside of Wu-Tang brethren and his buddy Redman, it's never convinced me. Why? "Tical".

This 1994 debut is chockfull of dirty, gruff charisma and masterful flow; a record that has allowed us to ignore the shoddy sequel and prequel. And for the most part, he holds down this album on his lonesome. This showcased why Meth was rightfully chosen to lead the Clansmen in to releasing individual albums - he's an incredible listen. Easy on the ear, but even easier on the beat - and these beats are not the easiest, most traditional ones to rap to. This is RZA in '94, so expect to be dragged through dusty, lo-fi synths and depressing jabs at pianos. I can't remember who was quoted as saying it, but it was an artist I follow on Twitter that stated nobody made beats that felt like the 'hood, more than RZA in the mid-90s. It's difficult to argue, as everything he touched was dripping with the cold, dreary feeling of struggle and pain. The concrete maze of city blocks were laid down in audio form for all outsiders to absorb. Even "All I Need", a largely uplifting ode to a partner, is as morbid as anything RZA has made for horrorcore outfit Gravediggaz.

The production from RZA is very much a continuation from "36 Chambers", although the martial arts theme isn't as prominent as their first group album, or on subsequent solo LPs such as "Liquid Swords". "Tical" limits the skits and movie snippets but much of that energy is channelled in to the production, most significantly on "Bring the Pain". Even for 1994, this track is repetitive, but it continues to be one of Meth's best songs thanks to the way he spits a song's worth of "Torture Skit" lyrics. A personal favorite is "Meth Vs. Chef", where Meth sounds like a man possessed. Designed as a mock-battle against fellow Clan member Raekwon (the Chef), Meth rattles off some ginsu-precise rhymes that sound majestic. The bells ringing, the crowd applauding, the fact that the beat sounds like a life-support machine beeping away, while the snares are as vicious as a boot to the ribs. It's what the Wu-Tang is all about. RZA is again in his element on "Sub Crazy", a crashing, distorted blend of clipping bass and what can only be described as a steam train beat-boxing. There are very few Wu-Tang Clan songs that feel as satisfying as THAT drop at 0:23, or as memorable as the second verse: "Shit's gonna happen if niggas start actin'
Like they want problems.ÝYou want 'em? You got 'em
Rap contact, is writin' this exact-
Ly, the way it should, be, attack
Killer Beeeees on the swarm
Alaikum as-salaam, drops bombs like Qur'an
The ism helps to stimulate myÝpugilism
I bust rhymes like jism, impregnate the rhythm with the wisdom
Decipher, the stee I be hyper
I dwindle the style, that rekindle like old flames
Ssssssss-saliva, check the wicked flows I delivah
Oops, I mean delivers like the Hudson River
Styles be trite, trife like a thief in the night
I be that sneaky-ass nigga bustin' nuts in yo wife
Blasted, buggin' off Bacardi and acid
Flippin' on the mic, it's a classic"

The fact that RZA follows it with police sirens and fist-pumping trumpets on "Release Yo Delf" highlights how The Abbot could do no wrong between 1993 and 1996. Blue Raspberry's distinctive vocals pump soul in to the hook, while also breaking up the heavy male presence throughout. There are also numerous glimpses at themes to come in subsequent years - particularly the sound of killer bees stinging victims at the start of "Mr. Sandman". One look at the tracklisting highlights how deep the Wu-Tang phenomenon was stretching, being drenched in slang that average listeners are still deciphering.

Meth even claims to "hate commercial rap with a passion", before finding himself thrust in to it in the years that followed. The fact that "Tical" was still part of the one-take generation, feeling like a darkened basement where smoky cypher sessions took place, lends this a true, almost old school feel that can only really be compared to "Enter the Wu-Tang (36 Chambers)". This was before RZA was let loose in an expensive studio and crafted the magnificent, if overlong "Wu-Tang Forever". It may not be as refined as subsequent albums in the Wu-Tang discography, but there's little that is as pure fun. There's certainly some Das EFX in Meth's flow, and also in RZA's dank, grimy beats.

"Tical" is an album that doesn't dwell on its subject matter either; references are made on every song to Tical, Meth's term of choice for marijuana, but never is it overbearing or the listener made to feel like a dork if they don't dabble in the doobie. Something I didn't realise until recently was the play on the word "methodical". Method Tical?. Looking back, it's not the best piece of wordplay, but Meth's not trying to be clever here. There are other branches within the Wu-Tang family tree to cater for intricate metaphors and vivid storytelling- Meth is all about swaggering confidence and his playful, experimental flow. Remember flow? Other than Joey Bada$$'s new album, I couldn't tell you who has the best flow from the current crop of heavy hitters because there aren't many that still emphasize it. AZ, CL Smooth, Andre 3000, heck even Jay-Z was flowing wonderful in the 1990s.

Method Man never quite matched the winning combination of catchy, sing-a-long rhymes with RZA's filthy, minimal production. It's also the only time we received a Method Man album that FELT like a Wu-Tang Clan release, and that's a damn shame. "Crystal Meth" has a lot to live up to, but also needs to bring some closure on Meth's solo career before he's disregarded entirely when fans think of best emcees.