Skyzoo :: Music For My Friends 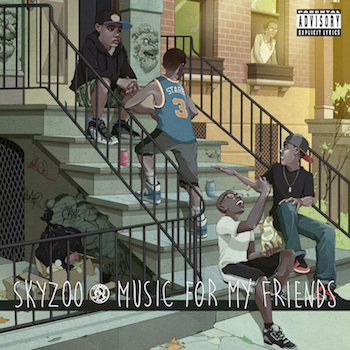 Skyzoo, the most amicable emcee who raps with confidence and oozes swagger, returns with his sixth album having built up a respectable discography in recent years. His albums have always been great listens and his latest is no different, although it isn't quite up to the excellence that was "The Salvation" or "A Dream Deferred" (arguably his finest album), but last year's "Barrel Brothers" alongside Torae showed that he could spend an hour spitting game and ensure it sounds fresh as hell.

Skyzoo's new album "Music For My Friends" (MFMF) is more introspective, but shows how smart Skyzoo remains not only as a rapper, but as a writer. An example of this is on "Luxury", which to the casual listener could be construed as a typical, flashy brag-rapper sharing his latest tales of misogyny and drug-dealing. When coupled with the video however, it ends with a unique twist as a child carrying books drops them after seeing how happy the local drug dealer is with his sports car and beautiful women.

"Suicide Doors" is a stronger example of this (Westside Gunn's hook on "Luxury" can grate), particularly with the MarcNfinit production. While any fan of Top Gear will know that suicide doors refer to the doors of a Lamborghini that open upwards rather than outwards, the lure of such extravagance is akin to suicide. Temptation is an important concept on this album, with Skyzoo sharing examples of how he looked up to the local drug dealers and guys who had all the nice things, while trying to remain grounded and morally sound with his group of friends.

Despite being self-released through Skyzoo's own label (First Generation Rich), "MFMF" shows major label levels of sound quality. "The Moments That Matter" with Kay Cola is almost good enough to be a radio single. MoZaic's presence on "Civilized Leisure" is similarly successful, with her sultrily sung vocals the perfect foil for Skyzoo's gritty, boastful delivery. The best of the bunch however is Kay Cola's second stint on "Sweet Pursuit", a standard track for the ladies. The fact that these three songs are three of the best on the album, raises the question as to whether Skyzoo could crack the charts with his blend of hard drums and soft singing.

Bilal and Black Thought lend "Money Makes Us Happy" a smoother touch, while The Roots' frontman also provides great lines like "we want more but need less". The track title is a bold statement on an album that largely paints money as the gateway to opportunity (just be careful how you travel) – but money does indeed make us happy. One of the more divisive messages comes courtesy of "Women Who Can Cook" which could easily be construed as sexist. It's effectively a song from Skyzoo that sees him showing love to beautiful women who can cook too. It's not quite as successful as something like Dead Prez' "Mind Sex", but it's a catchy enough song that means well. The Jadakiss-assisted (Jadakiss-ted?) "See a Key (Ki')" is decent enough but not as smart as the title suggests, coming off as an Action Bronson track without the memorable verses.

The inclusion of (presumably) real friends in between songs, throwing in some quotes from The Wire and the bold self-censoring of the n-word all lend this album a high like-ability rating. Skyzoo was already a well-regarded emcee, but his latest album solidifies his status further as one of this generation's most underrated. It's not as consistently good as "The Salvation", or as instantly satisfying as his work with Torae, but with recent months slowing down on the incredible start we've had in 2015 for albums, this is certainly worth checking out.