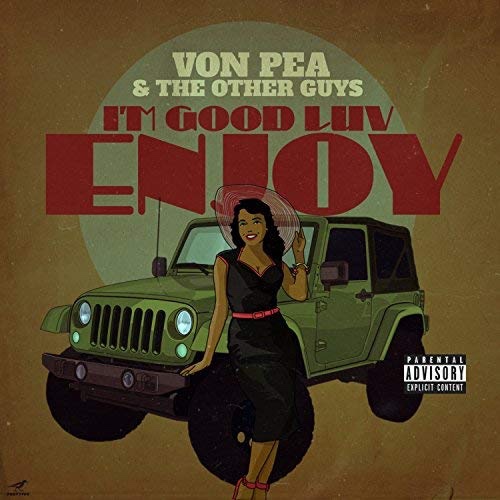 L, M, N, O, Von Pea. You may know the name best from the highly acclaimed group Tanya Morgan, but Pea stays busy dropping solo projects in between TM reunions. This time he's collaborating with the chronically busy Other Guys production team of Mighty Joe and Isaiah on the boards, although as TM's in-house producer (when they aren't working with producers like 9th Wonder) he's more than capable of lacing up the tracks himself.

At first I was thrown off when the sample copy of "I'm Good Luv, Enjoy" arrived because I had been told this was an EP, but when I imported it to my computer it was a half hour long. I quickly realized my mistake when I looked at the track listing and noticed every song had a doppelganger. Five of the ten tracks are Von's new material, and five are the accompanying instrumentals. They're fresh enough to listen to on their own so this isn't a problem in any way. I get a nice Soulquarian vibe off "Get Well Soon" as Pea collabs with TM's Donwill for an ode to "good living." I don't mean "good living" like driving big cars and eating big steaks, I mean "good living" like personal health and longevity.

"My brother eat clean, damn near vegan
And no fried, now steamed, sure to clear your skin up
But every now and then a, pork fried rice
start lookin like dinner again, here's to giving in - pig
I want to f--k at 80, I want to run at 60
So by the time I'm 40, only the lettuce crispy
And I remember 20, I'm at the partition
Sum'n barbecue sauce, covered my fries and chicken
You can feel it in your chest like bass
Why the hell kale can't taste like cake?"

Good question. Personally I recommend celery with a smear of hummus. It may not tip the scale as 100% "good living" but it damn sure tastes better than kale. Of course a man can't be healthy all the time and "Smoke Something" celebrates the joys of puff puff pass.

"I smoke pot - my pops did too
He caught me, I told him 'I learned it from watchin you!'
It's what I gotta do, the world's hard to cope with
I'm not a chicken, you're a turkey, let's get roasted
This is my brain on drugs, any questions?
I wake and bake and fry my egg and call it breakfast"

The references to PSA's from my childhood make me crack a smile, and I've been an advocate of "legalize it" ever since Ross Perot was running for President. I'm not going to fault him for this or any other unhealthy habit, as long as he keeps making quality jams like "The Twist," a perfectly laid back track to inhale and recline to, or his fly manifesto "Thicc Rihanna." People seem to be interrupting his groove and "they attack me in the mix like Drama King" but Pea still prevails anyway.

When Von Pea brags "Everybody I work with could do it alone/produce, record, and mix, rent the van and drove" he's not exaggerating - he hangs with talented cats and he is one himself. The only objection you're likely to have to "I'm Good Luv, Enjoy" is that he didn't give you MORE to enjoy. Once you cut the album in half you only get about 15 minutes and change of Von's flow, but you can still jam to the beats so there's plenty of value to spare in this EP overall.